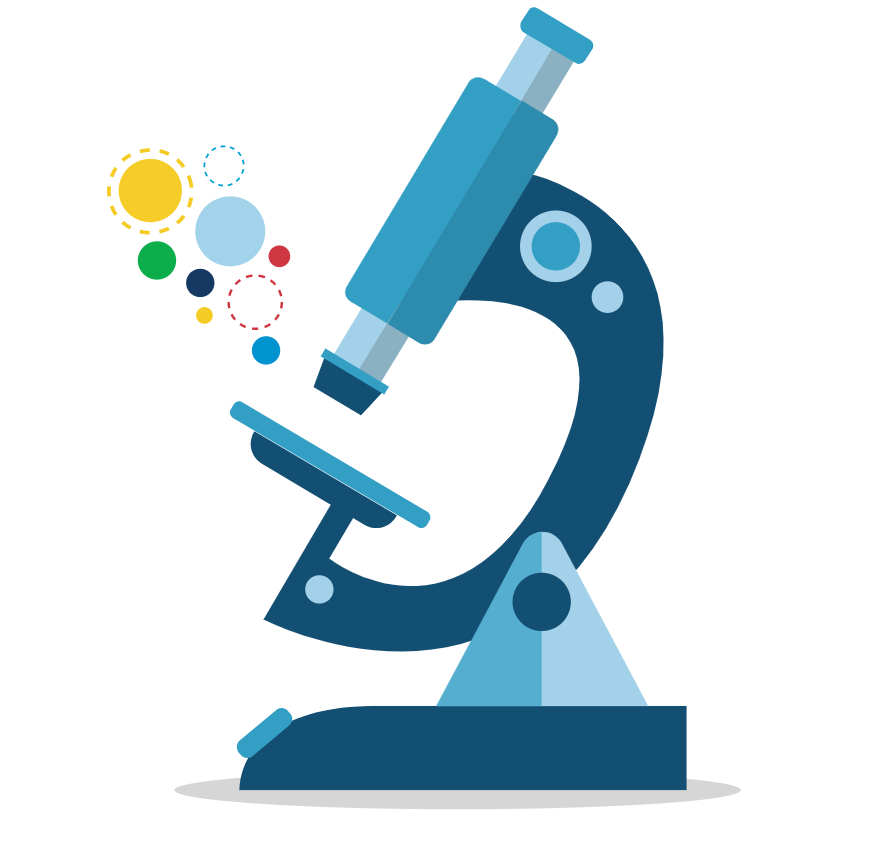 Wondering where all these insights come from? Or how we measure what we measure? Learn more about the research behind DiSC.

Psychological instruments are used to measure abstract qualities that we can’t touch or see. These are characteristics like intelligence, extroversion, or honesty. So how do researchers evaluate these instruments? How do we know whether such tools are actually providing accurate information about these characteristics or just generating haphazard feedback that sounds believable?

How reliable is the tool? That is, researchers ask if an instrument measures in a consistent and dependable way. If the results contain a lot of random variation, it is deemed less reliable.

How valid is the tool? That is, researchers ask if an instrument measures accurately. The more that a tool measures what it proposes to measure, the more valid the tool is.

Note that no psychometric tool is perfectly reliable or perfectly valid. All psychological instruments are subject to various sources of error. Reliability and validity are seen as matters of degree on continuous scales, rather than reliable/unreliable and valid/invalid on dichotomous scales. Consequently, it’s more appropriate to ask, “How much evidence is there for the reliability of this tool?” than “Is this tool reliable?”

A person’s DiSC® style is measured by asking them the degree to which they agree with a series of statements about themselves. These responses are used to calculate a score for that individual on the following eight scales:

Although these scales don’t show up in the profile, they’re used to determine a respondent’s style.

To determine if a tool is reliable, researchers look at the stability and internal consistency of the instrument. Stability is easy to understand. In this case, a researcher would simply have a group of people take the same assessment twice and correlate the results. This is called test-retest reliability. Internal consistency is more difficult to understand. Here, we have the assumption that all of the questions (or items) on a given scale are measuring the same trait. As a consequence, all of these items should, in theory, correlate with each other. Internal consistency is represented using a metric called alpha.

We can use similar standards to evaluate both test-retest and alpha. The maximum value is 1.0 and higher values indicate higher levels of reliability. Although not set in stone, most researchers use the following guidelines to interpret values: above .9 is considered excellent, above .8 is considered good, above .7 is considered acceptable, and below .7 is considered questionable. The reliability estimates for the eight DiSC scales are shown in Table 1. 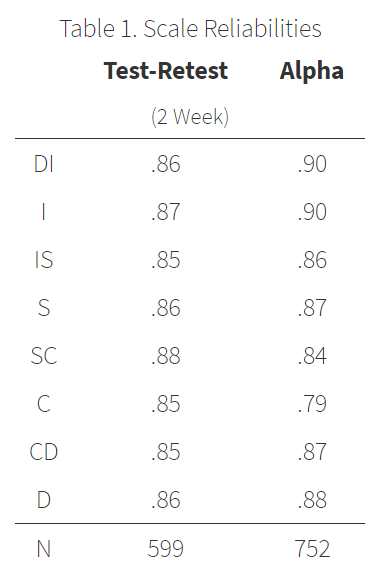 As Table 1 shows, all values were well above the .70 cutoff and all but one were above .80. This suggests that the measurement of DiSC is both stable and internally consistent. For more information on the reliability of the DiSC scales, see the more in-depth Everything DiSC Research Report.

There are many different ways to examine the validity of an assessment. We will provide two such examples here, but many more are included in the full Everything DiSC Research Report.

A statistical technique called multidimensional scaling also adds support to the DiSC model as a circumplex. This technique has two advantages. First, it allows for a visual inspection of relationship among the eight scales. Second, this technique allows researchers to look at all of the scales simultaneously. In Figure 1, scales that are closer together have a stronger positive relationship. Scales that are farther apart are more dissimilar. The circumplex DiSC model predicts that the eight scales will be arranged in a circular format at equal intervals.

As can be seen in Figure 1, the scales are arranged in a way that is expected by the DiSC model. (Keep in mind that the original MDS rotation is presented below and this rotation is arbitrary.) Although the eight scales do not form a perfectly equidistant circle (as predicted by the model), this theoretical ideal is nearly impossible to obtain with actual data. The actual distance between the scales, however, is roughly equal, providing strong support for the model and its assessment.

This website uses cookies to improve your experience while you navigate through the website. Out of these, the cookies that are categorized as necessary are stored on your browser as they are essential for the working of basic functionalities of the website. We also use third-party cookies that help us analyze and understand how you use this website. These cookies will be stored in your browser only with your consent. You also have the option to opt-out of these cookies. But opting out of some of these cookies may affect your browsing experience.
Necessary Always Enabled

Any cookies that may not be particularly necessary for the website to function and is used specifically to collect user personal data via analytics, ads, other embedded contents are termed as non-necessary cookies. It is mandatory to procure user consent prior to running these cookies on your website.

SAVE & ACCEPT
Go to Top